Videos of Aronian, Kasimdzhanov, and Anand

Anand to start his hunt for the title

Standing After Round One: The first moves of Kasimdzhanov and Aronian

Anand’s first steps on the tournament

Despite being a new entrant in this format, the World Rapid Champion Indian dominated Kasimdzhanov in the first game. Even though he played with the black pieces, Anand threatened the white king several times in the endgame. At the end he had to settle for a draw on the 50th move.

In the second game against Barcot, Anand played with black pieces again. This time both players were given a game formation 383 of the 960 possibilities. After move 19 the players realised that the game being equal will not provide a result and Anand accepted the draw when offered by French Grandmaster.

The third game of Anand was against the defending champion Aronian.
Aronian, who defeated Peter Svidler in 2006 to claim the Chess960 title, took more time before making a move as he was aware of Anand’s dominance and the ‘kill’ in Rapid Chess.
The Indian was quick to give a check to the black king on the 16th move, but a vigilant Aronian thwarted the attack. By the time the game was on the 19th move, the time difference reached a staggering six minutes in favour of Anand.
Though both the players made several small mistakes, they quickly rectified their errors before the opponent could exploit the situation. In the end Aronian offered a draw which Anand happily accepted.

“Mainly the problem is unfamiliarity. You come to the board and you need some time to get oriented. In fact, when you go for a normal chess game, there are things we don’t start looking at,” Anand told Chessdom’s correspondent Vijay Kumar after the games.
“From the very beginning when you are on move four you are not sure of your opponent’s next move while in normal chess you are quite sure where the pieces are. In the morning I played some games with the computer to practice a little bit and I found them very important.

Anand continued, “I think I had mild chances in one or two games but at the same time I struggled also. I think starting with three draws is a good beginning,” he said.

On the second table, Bacrot could not bear Armenian Grandmaster Aronian’s onslaught and accepted the defeat.

Kasimdzhanov was no match to defending Champion Aronian as well, and lost his second game. However, he came back in the third game and scored a stunning victory over Bacrot. 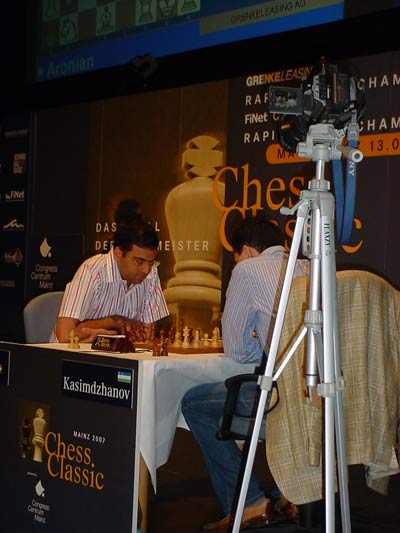