Logo of the Candidate matches, preparations for the event, and presentation of Kazan 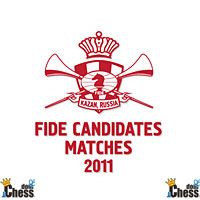 Preparations for the event have been going on in the past days. FIDE President Kirsan Ilyumzhinov and the President of the Republic of Tatarstan Rustam Minnikhanov discussed the process in Kazan, at a meeting that took place last week. The President of the Republic of Tatarstan assured that the Matches will be organized on the highest level. Ildar Khalikov, Prime Minister of Tatarstan, Rafis Burganov, Minister of Youth Affairs, Sports and Tourism of Tatarstan and Ilsur Metshin, Mayor of Kazan also took part in the meeting, detailing everything around the Candidates matches.

It has been confirmed that the there will be a nice opening ceremony and it will contain the drawing of colours for all the rounds of the event.

As every major chess event, the Candidates Matches will have live commentary. This time the team will be especially strong – GM Naiditsch, GM Bacrot, and the Chess Evolution team will comment live together with the resident commentators GM Bauer, IM Ipatov, and IM Perunovic.

Make sure to check out the first two video previews by GM Danielsen, the matches Topalov – Kamsky (video) and Kramnik – Radjabov (video).

The most famous building of Kazan – Soyembike Tower- according to legend, dates back to the fall of the Kazan Khanate. However, judging from all over, it was built no earlier than the last quarter of the seventeenth century, but partly on the foundations of an earlier watchtower of Khanate period. Soyembike Tower is not only the symbol of Kazan. It is also one of the few in the world of falling towers. At two meters above the Leaning Tower of Pisa, it is immediately after construction began to lurch to the east, because the west side of it was built on the foundation of an old watchtower and was more stable. By 1930 the deviation from the axis of its top was already 128 centimeters. Remedial activities conducted in 1990 suspended its roll.

Another feature of the tower is its architectural elegance. Tower produces unusually strong impression of harmony and aspiration to the sky, the proportionality of parts. It consists of seven stages: three rectangular with open galleries and a low parapets and four upper octagonal.

When was the Soyembike Tower built? On this question among historians and architects already many long years there are hot discussions. In brochures and guidebooks the time of creating the tower is shown as 1645-1650-s (in question). The biggest connoisseur of antiquities Professor S.Shpilevsky believed that the tower is of Tatar origin. But the well-known Tatar educator Kayum Nasyri contrary believed that the tower appeared as a patrol-guard after the conquest of Kazan.

Renowned archaeologist Alfred Khalikov in 1976-1977 conducted excavations near the foundation of the tower and came to the conclusion that it was built no earlier than the last quarter of the XVII century. Near the foundation of the Soyembike Tower was found another, earlier foundation of the watchtower of XII – XV century, in the place of which partially was built a new tower. Because of this heterogeneity of the base in the future there was the bias. A.Khalikov also found that standing on this spot Tatar tower also served as a minaret of a nearby Khan Mosque and there was the crescent at its peak. In addition it was the tower of the Khan’s court, fenced with stone walls inside the Kremlin.

It is interesting that the people of Kazan always believed the Soyembike Tower is the national sacred place. Moreover the Russian residents of Kazan also from the very beginning called the tower on behalf of the disgraced Tatar queen Soyembike. In Kazan everybody can tell a legend about the tower.

When Ivan the Terrible conquered Kazan and saw a beautiful khan woman Soyembike, he was so struck by her beauty that he offered her to become his wife. Soyembike Khanum understood: if she refuses the terrible king, he would kill all her people. And she agreed. But with one indispensable condition: to build in seven days seven storied tower to the sky. Ivan the Terrible accepted this condition. He collected all the most famous Russian artists, and the work started. On the first day was built the first tier, on the second – the second tier and so on. A week later the tower was ready – harmonous, seven storied, up to the sky.

Soyembike had no choice but to fulfill her promise. She asked the king’s permission to climb the tower and say goodbye to the city before departure from Kazan. The king allowed. Soyembike climbed the tower, said goodbye to all Kazan citizens, threw herself down and died. Since then, they say, the tower has her name.

In fact everything was different. In 1549 Safa-Giray Khan, Soyembike husband died. By law the throne was to mount their son – two years old Utamesh-Giray. In 1549 he was proclaimed the khan, but remained on the throne quite a bit. In relations between Moscow and Kazan was reached an agreement under which Shah Ali to occupie the throne. Utyamysh and his mother were to extradite to Moscow authorities. August 11, 1551 they were sent to Moscow. There she died.

Zilant is a great flying serpent, depicted on Kazan state emblem. He is the most recognizible symbol of Kazan and its legendary protector.

On the palace of modern Kazan according to the “Chronicle of Kazan” once existed a greatest “serpent habitation”. There, on the hill which in Kazan is still called Zilant Mount lived winged serpent “in the crown of the king of serpents” – owerful and beautiful Zilant. The builders of the city with the help of miracle-men more than once or twice burned straw to exterminate serpents spawn, but the king Zilant long remained unhurt. People still gained their end and founded on Zilant Mount their settlement (one of the legends there was originally founded ancient Kazan). Anyway, at the end of the 1940′s archaeologists have found in the former lair of the snake king pottery fragments and pieces of tile fourteenth century.

Incidentally several years after the capture of Kazan, in 1557 – on the mountain was founded Zilant male monastery. Monastery collected tax from all the merchant ships, especially many of those who brought the salt and fish from the upper Volga and from Astrakhan. Reaching the monastery the large merchant ships loaded goods on the shallow-draft vessels, which by the city channel went to the shorehouses. But no matter how monks resist to the mountain and the monastery forever stuck pagan Zilant name.

About terrible winged serpent Kazan people eventually began to remember with affection. Way of the people’s love are inscrutable. And gradually they convinced that the king of serpents invisibly supports and helps the common people. In the end the image of a mythical dragon protector of the city got to the state emblem of Kazan.

Image of Zilant was very popular in the architecture of Kazan. Rare in its exoticism, it gave great scope for imagination of artists – craftsmen. They depicted it in stone, gypsum, iron, wood, iron.

For the chess dragon, check the video below.

One of the most popular heroes of the Russian folk popular print lubok of XVII-XIX centuries: “Kazan Cat, Astrakhan mind, Siberian wit”. Kazan Cat was originally linked to the subjects-attributes of his nomination – Kazan, Astrakhan and Siberian Khanate, and implied along with them a generalized image of Tatar.

The Cat had his own folklore and literary ancestors and relatives. The closest relative to a hero of lubok was Cat of King (Khan) from Mari legend “How Maris went over Moscow”, it tells of the siege of Kazan Kremlin in 1552 by the troops of Tsar Ivan the Terrible. The court Cat managed to overhear how besieging Mari kings Yylanda and Akpars were tunneling under the Kremlin wall, and he warned the Khanof the danger. Khan, his wife, daughter and Cat secretly moved out to the river Kazanka, got into a boat and sailed safely from Kazan. 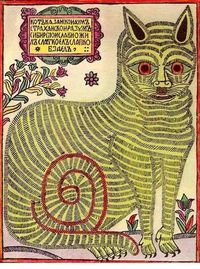 The real prototype of Kazan Cat should be recognized the breed of Kazan cats. At the existence of this breed is already in the XVI century points mentioned Mari legend, and by the middle of the XVIII century breed became so famous that the Kazan cats by the decree of Empress Elizabeth was moved to the capital for service in the Winter Palace. Together with other Kazan cats were the fluffy Life Guard of Empress (cats under Empress was exactly 300, the same as the Life Guard, who raise her to the throne). Cats were put on a special allowance, initially they were given lamb, then – by special order of the Empress – the black grouse and hazel grouse.

The sculpture of the legendary Kazan Cat has appeared in the capital of Tatarstan at the intersection of Bauman and Musa Jalil streets. The author of this metal composition – the famous artist Igor Bashmakov.

Every year in the Kremlin in the center “Hermitage-Kazan” an exhibition of “Walking with Kazan Cat” is spent.

Kazan is the capital of the Republic of Tatarstan, one of the largest and most beautiful cities of Russia, which is on the list of UNESCO World Heritage cities.

The old Kazan is the center of the city. There are beautiful buildings raised in different architectural styles. Mansions in the style of modernism coexist with the Baroque monuments. You can feel the aura of antiquity spell from ancient white walls of the Kazan Kremlin wherefrom a superb view on the river opens. Imagination is boggled by the red bell tower of Bogoyavlenskaya church at the pedestrian Bauman street beloved by tourists.

Kazan easily combines the culture and traditions of the East and the West: next to the finely cut minaret towers there are old Orthodox churches.

A prevailing feature of life in the city is peaceful, creative coexistence of different religions and nationalities.